In which I discover that the south of my homeland doesn’t receive nearly enough rain to be classed as a proper part of the principality, and the strange dialect confuses my already rudimentary grasp of the Welsh language.

Last month, we spent a week in the village of Dale, in the south-west corner of Pembrokeshire. We started exploring straight away, taking a walk around St. Anne’s Head on the first day, and continuing across an old RAF base. Due to a lack of resources during WWII, trainees at the site had to pretend to be flying planes and fighting enemy aircraft, while actually riding tricycles belonging to ice-cream sellers. It’s things like that which made this nation great.

Over the following few days we explored the coast all the way up to St. David’s. I’d highly recommend a visit to Abereiddy, a wonderfully secluded hamlet at the end of a steep windy road, with a little beach and a great outlook into the Irish Sea and along the coast.

The tiny city of St. David’s proved far more interesting than anticipated, including the Bishop’s Palace (a castle in all but name, it seems to me). There’s also a great hand-made chocolate shop, and a proper old-school butcher’s where you direct the proprietor in hacking up bits of animal. He provided us with possibly the nicest fillet steak I’ve ever eaten. Sorry veggies.

The beach at Pendine was the scene of four world land speed records between 1924 and 1927. This included Malcolm Campbell in the legendary Blue Bird, and another car by the name of Babs which had a 27-litre engine! Unfortunately the beach was purchased by the MOD at some point, and they’ve rather inconsiderately turned it into a firing range.

Having managed a walk of about half a mile down the sand before reaching a sign involving the words “bomb” and “missile”, we returned to find the grandly-titled Museum of Speed closed too. Bummer. Nearby Laugharne proved more fruitful, with an awesome castle (not a folly, this one had bits of cannonball embedded in the walls) and various residences of the Welsh poet Dylan Thomas (N.B. I’ve included a Wikipedia link about Dylan here in case anyone’s interested, but I’ll warn you now that it includes phrases like “rhapsodic lyricism” and “each image engenders its opposite” so if you’re a scientist and rubbish like that makes you angry, it’s probably best not to click it). A quick tour of Tenby on the way home demonstrated that it was nicer than I remembered, with some cracking fish and chips too.

By Wednesday, there had been five days of dull, monochromatic, boring grey sky. Not great for moral, but utterly useless for any kind of interesting photography. With a break in the weather on Wednesday afternoon, I took a wander along the headland at Martin’s Haven, and managed to get a couple of reasonable shots of the evening sun.

On Thursday, having covered the coast from Laugharne all the way around to Fishguard, we went back to Tenby and visited Caldey Island. It sits just off the coast and has had a monestery of some form on it since the sixth century. There’s also now a lighthouse, signposted walks, and a chocolate and fudge factory. Visited predominantly by old people, it’s lovely and quiet because once off the boat none of them can walk more than about 200 yards from the cafe. This gives people with any degree of mobility plenty of opportunity to explore in peace and quiet. The most exciting part was getting the boat back to Tenby, as it entailed a ride in some kind of amphibious vehicle which drove us off the beach and into the water, then sailed out to transfer us to the proper boat. Awesome.

I don’t mind admitting that the following day we were at a bit of a loose end, and so decided that we’d spend our last couple of days in the Brecon Beacons. Neither of us had visited before (and to be honest I was missing mountains quite a lot by this point), so I leapt at the opportunity when Becs suggested it. We booked a hotel, and set off eastwards. In the morning we walked the dog in Crickhowell, which turned out to be a fine bastion of middle-class-ness nestled in the valleys near the Black Mountains. With independent grocers, butchers, bakers and coffee shops it was a great place to stock up on supplies. That afternoon, I went for a run in the Brecon Beacons proper.

My route took me over the three highest peaks (Corn Du, Pen y Fan and Cribyn), before heading up the other side of the valley, a route commonly known as the Brecon Horseshoe, apparently. I had a little mishap on the way back down to the car and took a bit of a tumble, but was otherwise pleased with a 16km, 900m ascent, mid-afternoon jaunt. Good training for the forthcoming LAMM weekend, and reassuringly easy! The following day we purchased some spectacular bits of meat from the Welsh Venison Centre, then hit up another UNESCO World Heritage Site, increasing my tally again. The Blaenavon Industrial Landscape is basically an example of what happens when you cram heavy industry into a valley, and we visited Pwll Mawr (Big Pit) for a closer look. 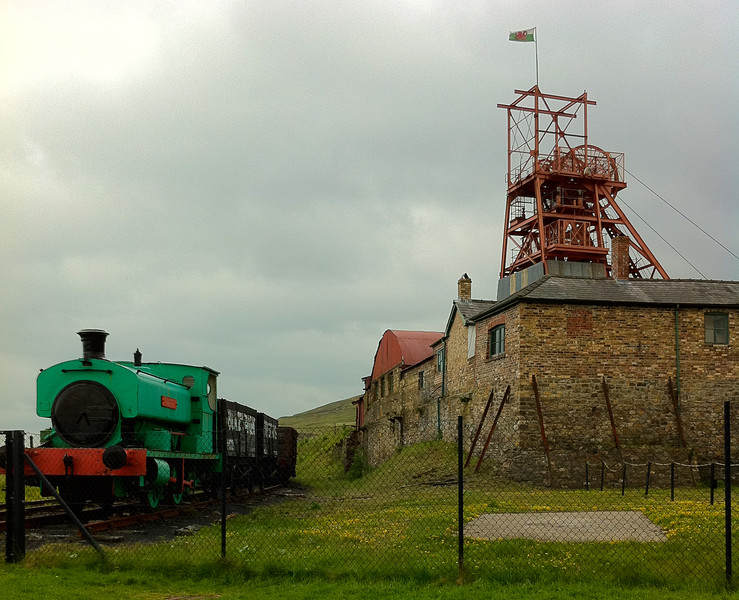 Entry is free, and it’s well worth a visit. I’ve been to slate mines, copper mines, lead mines and gold mines, but never a coal mine before, so it was fascinating to see obvious seams of the stuff stretching off underground. Not that I would have wanted to make a career out of mining it, obviously. With this, our time in the southern end of God’s great country came to a close, but we’ll definitely be back to explore the Brecon Beacons and Black Mountains further.

This site uses Akismet to reduce spam. Learn how your comment data is processed.

This site uses some Wordpress cookies to make the site work, and Google cookies for their "Captcha" spam protection in the Comments section. Where content from other providers is embedded in posts (e.g. YouTube) they may set their own cookies; these can be controlled from their sites. Find out more.